Ready for the summit

Towards the third training outgoing

This group really doesn’t stop surprising. Even before being in the mountains, I realise this on the occasion of a feedback session on the previous outing and preparation for the next.

I’m surprised for many reasons, but above all for how the elements confronted are collected and analysed with scientific precision. Nothing is left to chance, exactly how it is in a client’s Change Management project: the elements of satisfaction and dissatisfaction are analysed, studied, and evaluated. Corrections are made, and lessons are learned. The destination is clear, there is no deviation if not to improve the journey.

And it’s obvious after the first outing that this method works. The graphs that the projector displays in the shadows of the office, scream “victory!” On the question “how much do you want to continue this adventure?” the score bar practically goes through the screen! The last time, most of the anonymous votes were dispersed among the median scores. It’s clear that the spirit of the challenge and the will to do it are overtaking the difficulty and the fear.

But the next graph says it fully: “how prepared do you think you are for the next phases?” The result is the opposite: more votes went towards the lower end of the scores this time.

A problem? No, it’s something else altogether. They all begin to understand that it’s serious: the next step won’t be just a walk, and from now on each outing will be a bigger challenge for the body and the mind. The first peak awaits us: we will try to reach the top of the Mont Fallère, surpassing 3000 metres. For most of the people present, it’s the first time at this height. If you add that after the peak there will be a long, exposed crest, with chains and via ferrata equipment, we can understand that this phase will be very different from the previous ones.

And, in fact, even the next graphs demonstrate that this is clear to everyone: most people have started to train or have intensified what they were already doing, and 94% of them feel much more aware of what it means to be in the mountains.

Let’s say that when the game gets hard… Methodos starts to play. And the feeling this time is of having a real group of mountaineers here. Also because, from now on, they will be branded like a real team, with the best technical mountain equipment that there is: Salewa, the sponsor, has sent the material! 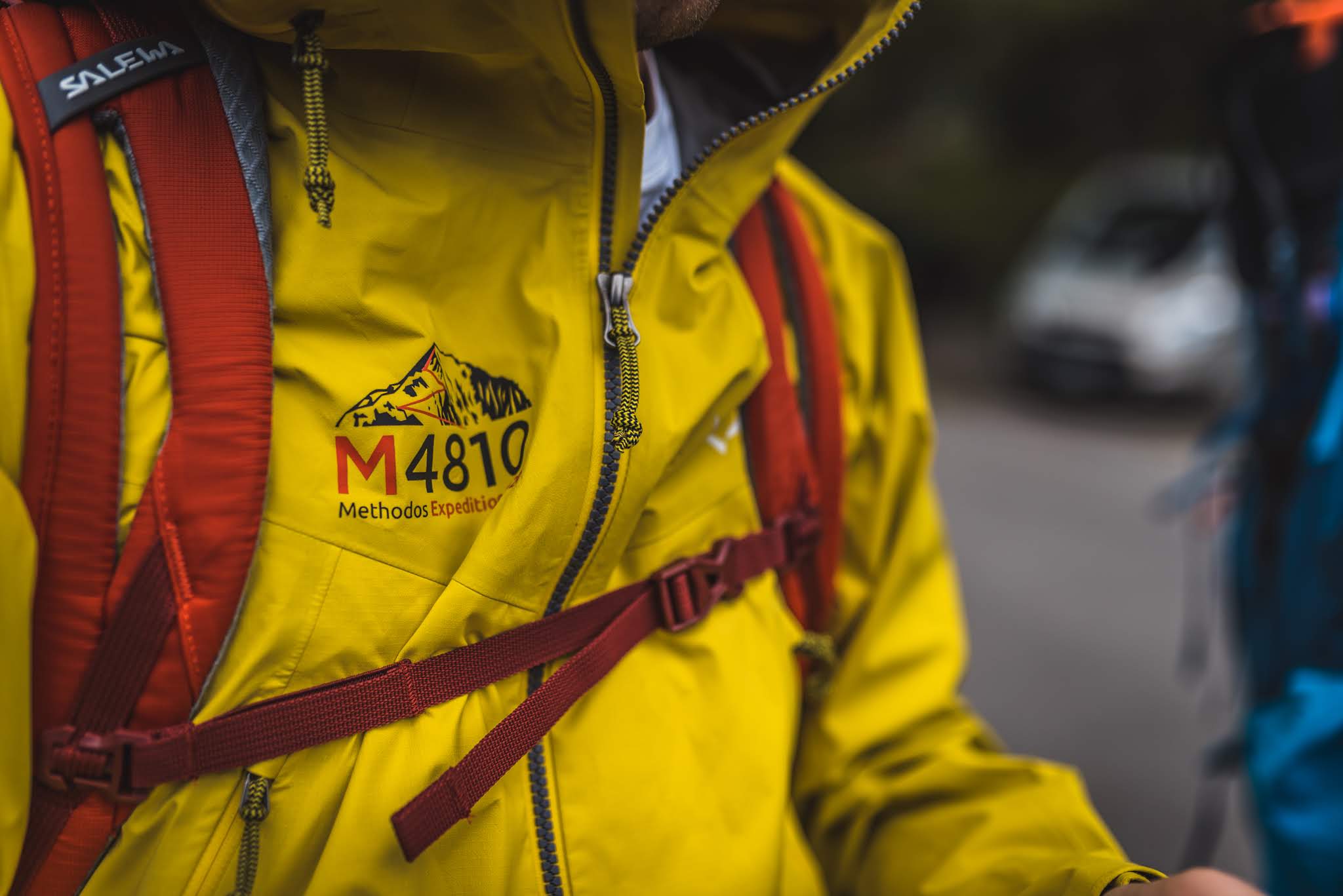 They’re beautiful, and excited whispers trickle through the audience while a metaphoric handing over of equipment takes place. “The adventure starts here”, is the phrase that accompanies its passing from one hand to another. Shivers.

Coloured jackets, beautiful backpacks, walking sticks so light that they seem fake, and so much more comes out of the packs. One thing more beautiful than the last, materials whose quality can be felt as we touch them. All the items are branded with the project’s graphics: the Methodos logo, the M4810 one, or the characteristic red line that represents the journey towards the summit of the Mont Blanc. You feel part of something bigger just looking at them!

We’re really ready now. And the fear? A little but will always remain. But by now they’ve all learned to laugh despite it. The comments are getting more sarcastic and funny, like saying “we’ve gotten so far, it’ll be hard but will overcome this one too.” And it’s true: as such a close-knit group, they can really face anything.

But the fear should also be faced, and it’s done with knowledge. For this reason, the meeting proceeds with some symbols of safety in the mountains. Being prepared and knowing how to behave in case of need is fundamental when we face something new, and the interest can be seen in the eyes of the team as they follow the slides.  They really want to be prepared, of conquering the summit of the Mont Fallère.

The question is, will it allow itself to be conquered?

It is the first peak over 3.000m of our project

Mont Fallère is found in the Grand Combin Alps in the Aosta Valley.

Found between the Gran San Bernardo Valley and the Valdigne, it’s a great introduction to the magical world of the 3000s. Mont Fallère, situated in the heart of the Aosta valley, proposes a 360° panorama of all the Aosta valley peaks. Its layout is not the be underestimated, but overall it doesn’t present great difficulties, even if we need to be really careful in the final part of the ridge.

We go up in two stages: the first day up to the Fallère Hut; the second day we arrive at the summit and then we go down to the valley.

Our first alpinistic climb to a summit

Pointe Léchaud (3.128m) is located along the borderline between Italy (Valle d'Aosta) and France (Savoy).

It is located south of the Col de la Seigne (2.512m) between the Veny Valley and the Savoy Valley of the Glaciers.

We climb in two stages: on the first day we walk from La Visaille to the Elisabetta Soldini Hut (2.195m); on the second day up to the top and back to La Visaille.

From the hut we go up to the Col Chavannes (2.603m); from the hill we have to leave the marked path that begins to descend into the Chavannes valley, following a path on the right that crosses the very steep eastern slope of Mount Lechaud. The trail continues on the right, again not far from the crest of Mount Lechaud and crosses a small valley of stones or snow, reaching the wide basin where the Chavannes Glacier is located. Once we have put on crampons, we set foot on the glacier going diagonally to the left. From this point we gradually turn to the right pointing directly to the top, which can be reached by overcoming some easy rocky steps. What we see is a vast and spectacular panorama on the Italian side of Mont Blanc.

Crossing the Gigante glacier towards the Aiguille du Midi

Although it may seems like a "scenic walk", the Vallée Blanche should not be underestimated, as it is an itinerary that involves crossing the Gigante glacier. It is always necessary to be accompanied by an Alpine Guide who knows the itinerary very well and knows how to avoid the dangers.

We go up by cable car to Punta Helbronner (3.462m), we wear harnesses and crampons and we tie ourselves together.

The return is with the panoramic cable car which takes us back to Punta Helbronner.

The Gran Paradiso is the only mountain over 4000m that is fully on Italian territory. A classic and fascinating climb: after a first part on ice, to be able to reach the peak marked by a statue of the Virgin Mary, you must pass some simple rocky crossings.

The Monte Rosa is a mountain range that is found in the Pennine Alps, along the watershed line between Italy (on the border of the Aosta valley and Piedmont) and Switzerland. It gives name to the Monte Rosa Alps supergroup, which in turn is composed of various important groups and subgroups, east of the Cervino and south-east of the Mischabel range. It is the most extended range in the Alps, and second in height after the Mont Blanc. It is the highest mountain in Switzerland and the second in Italy, and has the highest average height, containing 9 of the 20 highest peaks of the chain.

Mont Blanc (Monte Bianco in Italian) is a mountain situated in the North-occidental Alps, in the Graian Alp range, on the watershed line between the Aosta valley (val Veny and val Ferret in Italy), and Haute-Savoie (the Arve valley in France), in the territories of Courmayeur and Chamonix, which give name to the Mont Blanc Massif, belonging to the subsection of the Mont Blanc Alps.

It’s 4808,72m (the last official measure was taken September 13, 2017) make it the highest mountain in the Alps, in Italy, in France, and in general in Europe if we exclude the Caucuses. This is why it’s called the King of the Alps. It shared a spot on the list of the highest Seven Summits with Mount Elbrus in the Caucuses.

Primarily granite full of peaks and crests, cut by deep glacial valleys, it is internationally renowned for its climbing and, from a historical point of view, the birth of mountaineering coincides with its first ascent: August 8, 1786.